I want your opinion.

What I want to know is whether you’ve ever submitted your website to online business directories.

But, more than that, I want to know whether it was worth the bother.

The reason I ask is this: Some people claim they get worthwhile results from them, while others reckon they’re a complete and utter waste of time.

END_OF_DOCUMENT_TOKEN_TO_BE_REPLACED

But do you really need to mass-produce blog posts like a factory assembly line in order to build up your following, move up the search engine rankings and attract more lucrative clients?

Well, it certainly seems to make sense doesn’t it?

I mean, you only have to look at a few of the many good reasons to do so and it would seem like a no-brainer:

Now, I’ve had my copywriting website for just over six months now. And it’s ranking well and getting enquiries. So do you think that I blog once, twice or maybe three times a week? Or even several times a day?

You must be joking!

END_OF_DOCUMENT_TOKEN_TO_BE_REPLACED 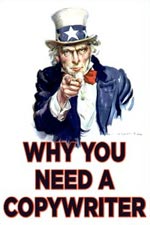 It’s the type of thing you see on loads of copywriter websites.

In fact, it’s often the primary focus of the content on their home page.

What am I talking about?

Well, it’s that same stupid ubiquitous sales point that’s not only totally pointless but also something your prospective customers get sick of seeing on practically every other writer website.

And that is telling your visitors why they need a copywriter.

END_OF_DOCUMENT_TOKEN_TO_BE_REPLACED

Whether you’re an experienced SEO copywriter or just starting out, unless you’ve been on some other planet for the last few years, there’s one thing you’re sure to know about search engine optimisation.

Yeah, you guessed it, it’s regular, fresh and unique content. And maintaining a blog or news section is just how you do it.

Now in an ideal world it would be great if you could have both of them on your website.

But if you could choose only one of the two, would you really know which one would be right for you?

END_OF_DOCUMENT_TOKEN_TO_BE_REPLACED

Are you a stickler for grammar? Or someone who couldn’t care less as long as your copy sells?

Whatever the case, one thing’s for sure:

The last thing you want as a copywriter is to look an idiot.

Because when you look an idiot then so do your clients. And that’s bad for business.

Now this isn’t some kind of spelling or grammar lecture.

END_OF_DOCUMENT_TOKEN_TO_BE_REPLACED

Have you ever noticed in the comment section of certain blogs a small additional feature, called CommentLuv, where you can place a link to your most recent blog post against your comment?

If you’re not familiar with it then take a look at the comment section for this post. And if you want to see how it works in practice then go ahead and try it out when you’ve finished reading.

Basically it’s a WordPress plugin designed to reward readers for taking the time to comment and engage with your blog.

END_OF_DOCUMENT_TOKEN_TO_BE_REPLACED

In my previous post, So you’re a website copywriter – I can do that, it’s easy!, I mentioned how you needed a very different set of writing skills for your content to work effectively online.

Well, in this post I’m going to tell you about 5 world-class blogs that can not only help you to develop these skills but also provide a wealth of guidance on how to run a successful freelance copywriting business.

Each has its own clear identity and focuses on a different aspect of being a freelance content writer – from blogging, marketing your writing and SEO to more traditional copywriting skills, such as direct mail.

Of course, you can find many more other great blogs for copywriters out there, but the following 5 are a great starting point and arguably amongst the best website copywriting resources you’re ever likely to find:

END_OF_DOCUMENT_TOKEN_TO_BE_REPLACED

Running your own website copywriting business sure beats working 9–5. It can be fun and, yes, it can be rewarding. But one thing it definitely ain’t and that is easy.

Yet, for some reason, many of the people I know assume that it’s all just a piece of cake. I mean, virtually everyone knows how to write, don’t they?

If only it were really that simple.

END_OF_DOCUMENT_TOKEN_TO_BE_REPLACED

Stay in the Know

* We'll only use your email address to send blog post updates and other relevant information about us.

Get more out of your website or blog and make every word work for you.
Hire Us  ►