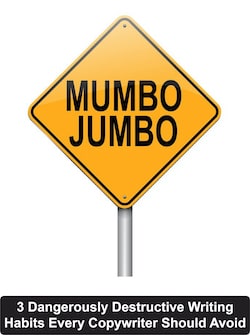 Doctors do it. Trendy marketing agencies do it. Lawyers are the worst culprits of all. And it annoys us to the point of exasperation.

– You’re told the patient has had a cerebrovascular accident but you’re not sure whether they’ve broken their arm or had a stroke.

– Your creative consultant wants to ‘articulate your message across several marketing touch points’ but you just want to shoot them.

– You’re given an important legal document to sign but need a translator to make any sense of it.

They, and many other professions like them, use their own special language. And because you don’t understand it, you don’t want to read or hear it. Because it just makes you feel stupid.

Now for these people it rarely seems to matter. After all, their living doesn’t depend on it. But if you’re a copywriter, blogger or online retailer it does.

People are free to choose whether they read your content or not. And if they can make neither head nor tail of it then they’ll click away from your web page, product sales page or blog post in an instant.

So ask yourself this:

Because if the answer’s NO then maybe you’ve got exactly the same problem.

Basically your content isn’t working because you’re NOT thinking about your target audience. And you can put this down to three fundamentally dangerous habits or deadly sins:

But you can set yourself free of sin just by recognising when you’re doing it and knowing how to deal with it.

→  Go easy on the jargon

In my previous post, I said short and simple was nearly always best. But I also explained that longer words are often more specific and could capture what you’re trying to say far better than a shorter, more general one.

Well, much the same applies to jargon.

Sometimes you’re talking to a very clear and specific audience. Sometimes you need to target specialist terminology in search. Sometimes no other word will do.

But excessive jargon is often too much for even the most technically minded people.

And it can also be bad for your SEO.

A web page awash with jargon is a bit like targeting too many different keywords at the same time. This makes it difficult for search engines to work out what your content is specifically about.

Also the more technical the product or subject matter the harder it is to avoid it.

But don’t let that be a problem: Instead, take the opportunity to help visitors make sense of any unfamiliar language. For example, you can:

But remember: You want readers to stick around for as long as possible. So hover-over text and call-out boxes generally work best.

Perhaps the best way to grasp parochialisms is to see them in action. So here are a few fictitious examples:

The Blog Writing Workshop is a collaboration between the Search Engine Marketing Professional Organization (SEMPO) and five internet marketing agencies from our local area.

The problem here is that the author knows what they mean by their local area, but the reader hasn’t a clue. Unless the writer’s previously stated where it is then it could be just about anywhere in the world.

This special 10-week series of seminars was specifically developed for small and medium-sized businesses under the guidance of Professor S.P. Hutchins.

But who on earth is Professor S.P. Hutchins? He or she means something to the author but absolutely nothing to the reader. Unless the writer has introduced them earlier in the copy then no-one will really care.

Why does this person assume everybody knows them?

Even if I do know them, I’m still not gonna share it – because not everyone in my own network does.

And as for ‘about website copywriting’. That’s far too vague and general. If you want to capture people’s interest, you really need to be a little more specific than that.

→  Spell out acronyms and initialisms

Acronyms and initialisms are pretty much the same thing. The difference is that with acronyms you pronounce the abbreviation as if it were a word:

But with initialisms you pronounce each letter on its own:

These days acronyms and initialisms seem to be almost everywhere. But don’t automatically assume readers know what they stand for.

So, whenever you use a new specialist term in your copy, don’t forget to spell it out in full and immediately follow it with the abbreviated form in brackets:

The Campaign for Real Ale (CAMRA) has just announced the dates for its next Staffordshire Beer Festival, a free annual event that takes place at various locations across the county.

But use your common sense. For example, if you write a blog about search engine optimisation then you really don’t need to say what SEO stands for in every single post.

What’s more, where you do need to spell out terminology you only have to do it the first time you mention it.

And remember that sometimes it’s not nearly enough just to spell out the term in full. You may need to go one step further and also explain what your terminology actually means.

This will, of course, interrupt the flow of your copy. But then again you can always use the same ideas we suggested for jargon – namely hover-over text, a call-out box or a link to explanatory content elsewhere.

Now becoming a successful copywriter or blogger is far from easy. And, in many ways, this is just what this blog seeks to explain.

But if you pay attention and learn to kick these dangerously destructive copywriting habits, you will be well on your way to becoming a better writer.

What bad writing habits annoy you to the point of exasperation? Tell us in our comment section below.

Kevin Carlton is an IT copywriter and blogger based in Stafford in the UK. He is owner of freelance copywriting service Write Online, which helps technology companies get the most out of their online presence.

* We'll only send you updates from our blog and relevant information about our services. You can unsubscribe at any time. Read more »

Stay in the Know

* We'll only use your email address to send blog post updates and other relevant information about us.

Get more out of your website or blog and make every word work for you.
Hire Us  ►